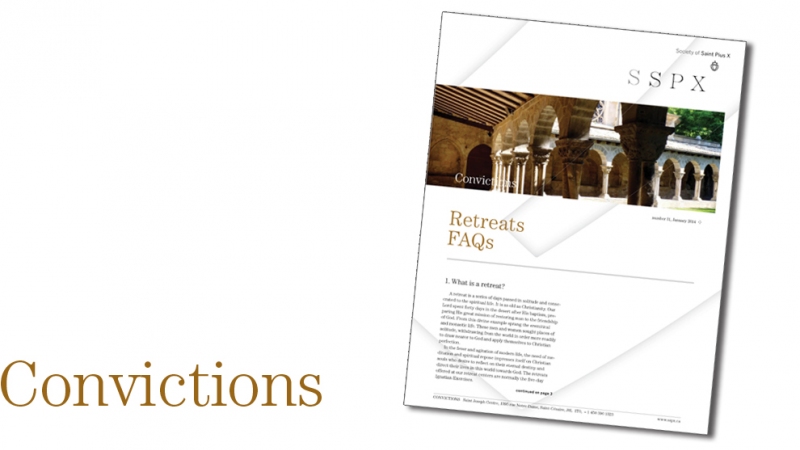 What is a retreat? For what type of person are retreats made? How will I be able to spend a week in silence? What will happen after the retreat? So many questions, answered in this issue.

The brilliant preaching legacy of Father Vallet encourages us to follow the counsel he gives us, and Saint Pierre-Julien Eymard in turn stimulates us to throw ourselves without fear into this great adventure.

This issue of Convictions has as its goal to recall the importance of spiritual retreats, an essential apostolate of the Society of Saint Pius X.

A Word from the District Superior

The two words that form the general title of St. Ignatius’s book indicate at once the soul’s action and labour, and the interior struggle. The explicit title of St. Ignatius’s book which we find immediately after the annotations leaves one no doubt: «Spiritual Exercises to conquer oneself and regulate one’s life, and to avoid coming to a determination through any inordinate affection». St. Ignatius offers a method to overcome oneself, that is to say one’s unruly passions. By gaining control over every conscious act the retreatant acquires inward peace — a result of self-conquest and self-government.

After setting forth the end for which God created man and all other things, the book leads us in a short time by the way known as the purgative way to acknowledge the ugliness of the sins which have caused us to stray shamefully from the end, and to cleanse our souls from sin.

Setting before us the example of Christ, our King and Leader, St Ignatius then invites us, in what is termed the illuminative life, to avoid the devil’s standard and to follow the standard of this very good and wise Chief, and to imitate His virtues; indeed he almost forces us to do so by the meditation of the three classes, or grades, of men (the first of which is reluctant to follow Christ, the second eager to do so, but with limitations, and the last bent on following Him at once wholly and always).

These resolutions are strengthened more and more in the third week, at the sight of Jesus Christ walking before us with His cross.

Lastly, in the unitive way, which comprises the fourth week, he enkindles in our hearts a desire for the glory of Jesus risen, and for His purest love. To this are joined annotations, additions, preludes, rules for discerning spirits, etc. The whole, if applied in the prescribed order, possesses the incredible strength of leading one to solid virtue and to eternal salvation.

The four weeks have been summed up still more briefly in the following sentences: deformata reformare; reformata conformare; conformata confirmare; confirmata transformare. That is: to reform what has been deformed by sin; to make what is thus reformed conform to the Divine model, Jesus; to strengthen what thus conforms; to transform by love the already strengthened resolutions.

Retreat FAQ's — Letter of Encouragement — Testimony of a Preacher — Five Days on Retreat for Eternity with God — Retreatant Testimonials — Why a Retreat? — Retreat Schedule for Canada

Read the entire issue in PDF