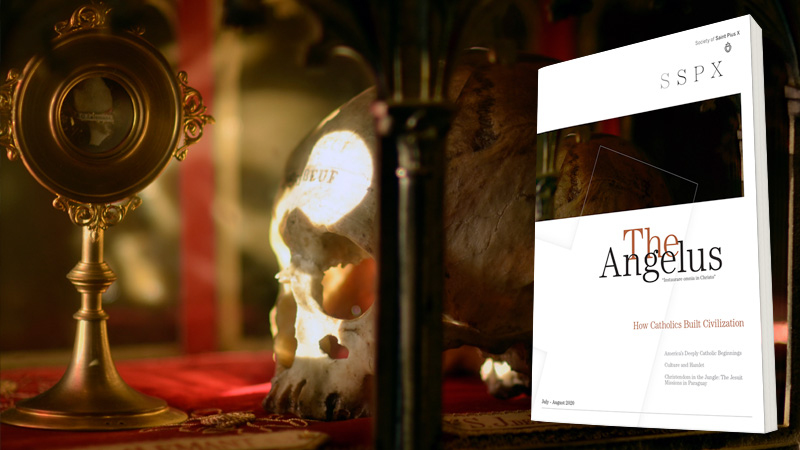 "No, civilization is not something yet to be found, nor is the New City to be built on hazy notions; it has been in existence and still is: it is Christian civilization, it is the Catholic City."  —St. Pius X, Our Apostolic Mandate

Many of you have asked yourselves time and again how to live in the world without being of the world. So many of your friends and family acquaintances are fully immersed in the world and its allurements. Few can withdraw from the world and live as cave hermits or religious behind thick walls. The difficulty is to be inserted in the whirlwind of the world without being engulfed in the worldly spirit. After the Fall, we sons of Adam are doomed to fail miserably in keeping the precarious balance between nature and grace, between the means and the end, between the earthly realities of temporal existence and Heaven’s bliss.

It is probably because this balance is so hard to obtain that Our divine Savior set up the Church and told her: “Teach ye all nations.” Yes, the Church teaches that the various aspects of mankind’s duty of state are stepping-stones to Heaven. She explains that the path to salvation is very much incarnated in their social life.

To speak of human perfection and social life is to evoke culture and civilization. Society is the foundation of human growth, and when it is sufficiently developed to create peace and leisure, art and literature, it has produced culture and civilization. Unless all three “Pius” Popes of the 20th century are utterly wrong, there is no question that fullness of civilization can be brought about solely by the Catholic faith. The radical conversion of the Pagan Roman Empire into a Christian realm under the Gospel legislation, manifests this truth beyond doubt.

The way we see our Creator defines the way we see ourselves and us related to His creation. It would be enlightening to oppose the civilizing influence of the Christian God to the terror of souls subject to pagan idols, to the just revengeful Yahweh of the Jews, to the fatherless God of the Muslims, to the Buddhist Nirvana, the bliss of nothingness. Would it be false to say that Western civilization has surpassed by far all other modes of cultures? Whether it be in literature or philosophy, in arts and science, in society and theology, the heritage which Christian Europe has given to the world has been unsurpassed.

The present issue of The Angelus relates some pointed moments of Christian civilization throughout the world, and especially in the New World. May it help souls to strengthen their conviction in a crucial moment when some ruthless and rootless subcultures are colliding with the timeless and sound principles of human and social life.

— America’s Deeply Catholic Beginnings
— Culture and Hamlet
— Christendom in the Jungle: The Jesuit Missions in Paraguay
— Isabel the Conqueror
— The Father of California
— Faith and Civilization According to Archbishop Lefebvre

— The Holy Sacrifice of the Mass: The Offertory—Part Four
— There is No Greater Love

— Autun Cathedral
— These Ruins Are Inhabited: Catholic Civilization Versus “the Libido for the Ugly”
— Ismael de Tomelloso: A “Red” with a White Soul
— How to Educate the Child in the Spirit of Service
— Questions and Answers