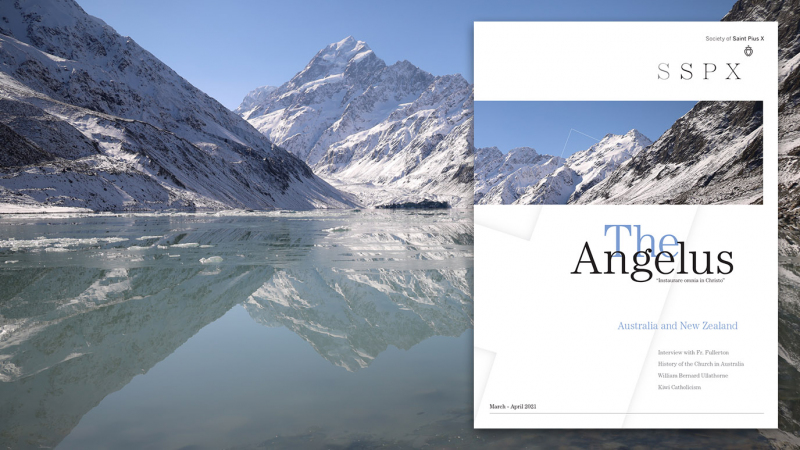 "The high contingent of Catholics on the island was composed largely of Irish prisoners of common crimes, but it gradually included educated political prisoners as well as honest men guilty of the 'crime of theft' fueled by starvation."

It was a good surprise for me to see that The Angelus is dedicating much of this issue to the field of apostolate which fell onto me for eight happy years. It is also my pleasure to contribute to it with a short interview printed alongside other prominent articles. The down under continent of Oceania—sometimes called Australasia as it comprises New Zealand too—is as vast as our United States, and yet, it is also vastly unknown to us.

The discovery of these lands came rather late among the world powers, mostly the Dutch, French, and English, who were vying to take over the Virgin Islands. Cooke, who finally settled Australia for the British Empire, unfortunately turned it into a penal colony.

The high contingent of Catholics on the island was composed largely of Irish prisoners of common crimes, but it gradually included educated political prisoners as well as honest men guilty of the “crime of theft” fueled by starvation. What is certain is that the desperate situation of dislodged Catholics gave rise to wonders of zeal from clergymen who finally fixed the faith of many Australians under the Papal flag. The New Zealand situation, if less ignoble, was still an ordeal for Catholic churchmen eager to preach the gospel to the uttermost parts of the known world. The visible fruits of our traditional mission outposts, manned by priests and lay-men, are proof of the invaluable work done by the pioneer missionaries.

Given the historical mixture of political and racial divides, it is no wonder that these largely inhospitable lands became the battlefield of great struggles for power and for souls. As you read the following excerpts and confront them with our present liberal anti-social bias, you will discover great men who have dedicated their life for the civil and religious ideals, like Ullathorne, Mannix, and Santamaria.

Despite the persecution against the early settlers, our own country cannot boast of having started as a “penal colony,” replete with ruffians and outlawed individuals. It has had its share of anti-Catholic bias and overt or covert persecution since its inception. Perhaps the past century of Australian and New Zealand examples of prudence and zeal will inspire us to better meet the next incoming attacks against the family and religion.

Letter from the Publisher, by Fr. John Fullerton

— History of the Catholic Church in Australia, by Fr. Shane Johnson, SSPX

— Worth a Thousand Words, by Marcus Nyssen

— The Holy Sacrifice of the Mass: The Canon—Part Three, by Fr. Christopher Danel

— Life in the Prison of Our Soul, by a Benedictine Monk

— The Trimmin’s on the Rosary, by Msgr. Patrick Joseph Hartigan

— The Irrelevant Church, by Christopher Fleming

— Thou Shalt Not Bear False Witness Against Thy Neighbor, by the Sisters of the SSPX

— Catholic Society vs. the Liberal Dis-Society, by A. Laroche