The Angelus - March/April 2022: The World Between the Wars 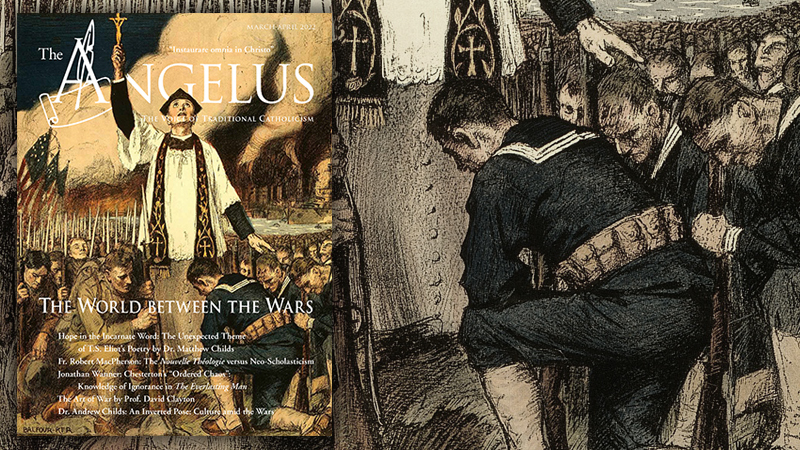 It is sadly ironic that this issue of The Angelus is dedicated to the theme of the World Between the Wars when, at the time I write this letter, Ukraine and Russia are the midst of one.

It is sadly ironic that this issue of The Angelus is dedicated to the theme of the World Between the Wars when, at the time I write this letter, Ukraine and Russia are the midst of one. Will the rest of the world soon enter this conflict? Will Russia’s ambitions end at Ukraine or are other lands, such as Poland and Lithuania, in its sights as well? In a way the world is already embroiled in this conflagration. The United States and Western Europe have imposed stiff sanctions on the former Soviet Union and continue to arm Ukrainians defending their land.

The Priestly Society of Saint Josaphat, a fraternity of traditional Greek Catholic priests from Ukraine affiliated with the Society of Saint Pius X for over 20 years, recently made a request to the Society’s Superior General, Fr. Davide Pagliarani, to invite traditional Catholic faithful to pray for Ukraine. While people may differ in their opinions on the war’s origins and purpose, we should never forget the devastation being felt by the Ukrainian people. At the same time we cannot help but wonder what larger reverberations this conflict will have.

In this issue, we examine the cultural effects of World War I and how they contributed to the even greater conflict that was World War II. As several of the articles make clear, it is impossible to understand either breakout of mass hostilities in isolation from each other. Unsurprisingly, both cataclysms had considerable consequences for the Catholic Church which are still felt today.

No true and lasting peace is possible without Our Lord and King Jesus Christ. Even if many nations around the world turn away from Him, faithful Catholics cannot. Now is the time to pray for His Mercy and the protection of the Blessed Virgin Mary, not only for the people of Ukraine, but the entire world.