The Angelus - May/June 2022: Catholicism and the American Imagination 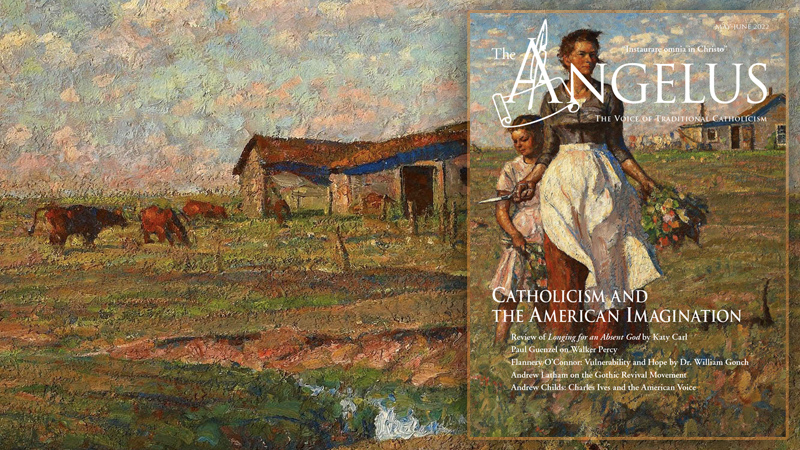 In all walks of life, Catholics have had a powerful impact on American culture, from baseball to the Supreme Court; Catholicism is an integral part of this great country.

The history of Catholicism in America is complex. We commonly speak of the “American Founding” with the English in mind, though Catholic missionaries and settlements were present throughout the land. That story has been largely obscured. Similarly, the strong Catholic populations in colonies such as Maryland may be better known, but that, too, tends to get lost in the liberalized narrative of how the story of the United States unfolded.

What is better known, and certainly known to traditional Catholics, are the numerous attempts to suppress Catholic influence throughout the country, not to mention the sad compromises Catholics felt they had to make throughout the years to better “fit in.” The increase of immigration from Europe expanded Catholicism in America, but that also was met with bitter resistance by those informed by Protestant and Enlightenment prejudices. Yet Catholics, fueled by the spirit of their faith and the formation that came with it, persevered. In all walks of life, Catholics have had a powerful impact on American culture, from baseball to the Supreme Court; Catholicism is an integral part of this great country.

In this issue we explore a taste of the influence Catholicism has had in America. Despite protestations to the contrary, Catholicism is as much a part of this country as any other faith and, indeed, the best parts of its development come from those who took their faith and interwove it in their participation in this land’s rich political, social, and cultural environment.

As always, I ask you to pray for Angelus Press, which continues with your support as the publishing apostolate of the Society of Saint Pius X. Please pray for the Society’s priests and religious, and trust that we are all praying for you as well.