February 2021 - District Superior's Letter: Be not Afraid with their Fear 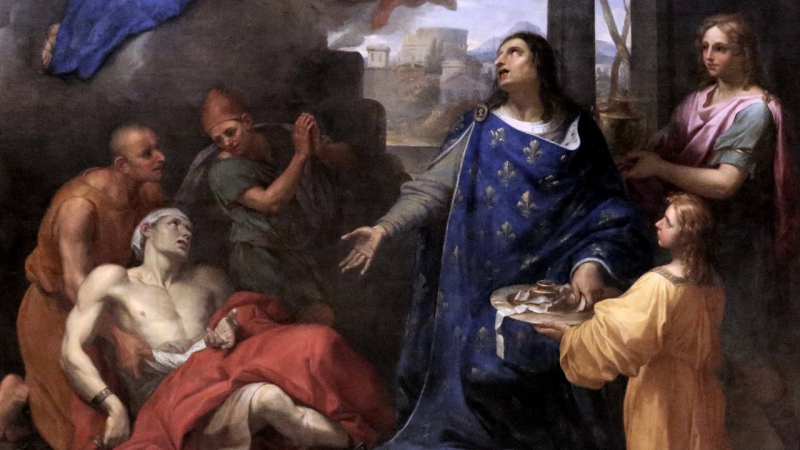 Be not Afraid with their Fear

“But if also you suffer any thing for justice' sake, blessed are ye. And be not afraid of their fear, and be not troubled.” (I Pet. 3, 14)

“Their fear” in St. Peter’s epistle is the pagan’s fear.  He has neither Faith in God, nor hope of eternal life. For him, nothing is to be feared more than pain and death. If death threatens and pleasure is still possible, he is prepared to do much to avoid death for when the end comes, all is lost. If his only hope is for pain and sorrow, why should he not commit suicide by euthanasia?

For the Christian, there is no such fear.  Jesus Christ has destroyed death and its fear because He has given us eternal life, first of the soul by grace and then of the body. Like David of old, who slew Goliath and cut his head off with Goliath’s own sword, Jesus Christ “dying, destroyed our death, and rising, restored us to life.” The fear of the Christian is not the first death of the body, but the death of the soul and the second Death in hell: “And I say to you, my friends: Be not afraid of them who kill the body, and after that have no more that they can do. But I will shew you whom you shall fear: fear ye him, who after he hath killed, hath power to cast into hell. Yea, I say to you, fear him.” (Lk. 12, 4-5)

Today, we can see the fearful response of the pagan to the Coronavirus.  “We must protect ourselves against the virus, therefore churches must close (religion is not “essential”); we cannot take risks (because nothing is worse than death); but we definitely need entertainment (so professional sports and filming for Netflix must continue).  The pagan also, being a slave, doesn’t think for himself, but simply “believes the experts” and does everything the Government tells him to do.  But the Christian remains free; guided by right reason and Faith, he will only obey God – and man insofar as God gives that man power to command.  That is why we should consider the question of whether it is licit to take the vaccines for the coronavirus.

The first thing to note are that vaccines in themselves are not evil and so, putting aside questions of prudence, it is not a sin to take a vaccine. The second thing to know is that no government has the right to force citizens innocent of any crime to take medical treatment any more than it has the right to make you marry or brush your teeth.

That being said, if I think that I should take a vaccine, I must be sure that it is morally good. Let us imagine four vaccines: one produced by the St. Raphael Vaccine Co. Inc., another by the Acme Vaccine company; a third by the Satanic Vaccine company, and the last by the Money Without Morals Vaccine Co. (MWM)

In the first case, by hypothesis, taking the vaccine involves no sin anywhere along the way. Moreover, St. Raphael’s vaccine is tried and tested and there is moral certainty that the benefits will outweigh the downsides.

The Acme Co. has produced a vaccine without sin – but of questionable efficacy, and the long-term side effects are still unknown. I need to consider carefully whether I take it or not, weighing the good and bad effects, as well as the urgency of finding a remedy, since I may not be very much at risk from the disease in question.

The last two companies have developed vaccines using human tissues taken from murdered babies.  The Satanic Vaccine company requires that I consent to the grievous sin that is abortion.  In no circumstances may I take this vaccine as it necessarily involves sin on my part, and I must die rather than commit sin.

The MWM Co. does not care whether I consent to the evil of abortion or not as its only concern is financial profit and (presumably) the elimination of disease. If I consent to the evil that the baby die so his tissues can be used to make a vaccine, I am guilty of what is called formal cooperation in evil, and I commit a sin, since I directly approve of the evil means that were taken.

But, if I in nowise consent to the evil action itself (abortion), although benefitting somehow from its consequences by taking a vaccine cultured in, or at least tested on, aborted fetal cells, this is not necessarily a sin. By making use of the fruits of an evil action I engage in what moral theologians call material cooperation in evil, which may or may not be allowed depending on the closeness of the cooperation, the seriousness of the evil that I cooperate in, and the damage caused to a third party.

If we now apply this to the Coronavirus vaccines, we will see now that there are many different vaccines in production.  We know that the Government does not have the power to force me to take the vaccine. I must decide in accordance with my normal rules of action: right reason and God’s Law.

If the vaccine is not derived from a sinful source, the question is really one of prudence. To act prudently, I must have moral certainty that it is going to do more good than harm. I should consider the gravity of the disease. If I am at little risk from any serious consequences from the infection, it doesn’t seem proven that I should be immunised – particularly if the experts say that the vaccine does not stop infection or transmission but merely limits symptoms. If moreover, the vaccine is experimental and the side-effects are relatively unknown, I might well be puzzled.

If the vaccine is derived from a sinful source, and I consent to this evil, then to take this vaccine would be an evil act because, in such a case, I would be guilty of formal cooperation in evil.  Material cooperation (as explained above) is not intrinsically evil but requires a proportionate cause.  Supposing I need to take a vaccine, I should take the one that is not tainted by an abortion, as clearly there is no proportional cause for taking a tainted vaccine if I can take an untainted one. But, if I cannot take the untainted vaccine, I must ensure that my motives for taking it are serious enough to justify material cooperation.  In this – as in other cases of moral perplexity on a serious matter, I may do well to consult a wise priest.

Some argue that it is intrinsically evil[1] to use a vaccine from a tainted source. They are wrong. It is not by definition wrong to use something obtained by sin. The harlot who gives $5 earned by sin to a beggar does not place him in a situation where he must starve rather than spend it, he can accept the help without approving of her sinful occupation. A tenant can rent an apartment which was built on Sunday; he is not obliged to abandon it. A student can use knowledge that he had acquired using stolen textbooks; he is not obliged to unlearn it.  Or, to take an example from history, Winston Churchill said to justify some actions during World War II, “I have lied many times for my country, and I will lie many more times.” Nonetheless, it is not a sin for us to benefit from his victory over National Socialism, even if that victory was obtained, at least in part, by evil.

In other words, to profit from an evil action is not always and necessarily to give consent to the evil action, and therefore it is not intrinsically evil, although it is true that such profiting from evil is ordinarily to be avoided, since, if we do not have a “proportionate cause” or justifying reason, it is wrong to cooperate even “materially” in a violation of God’s law.

Better than either of these extremes – giving blanket permission to take the vaccine, or forbidding it absolutely as intrinsically evil – is the opinion (in my view) of those churchmen who urge Catholics to boycott any vaccines derived from tainted sources, because, as they argue, when everyone takes them without scruple, it encourages abortion and the grisly trade in human body parts. The Pope and the bishops, for the common good, could well order all Catholics to this boycott. Whether they do or not, we must follow the principles of morality which absolutely forbid formal cooperation in evil, and allow material cooperation in evil if – and only if – there is a proportionate cause.