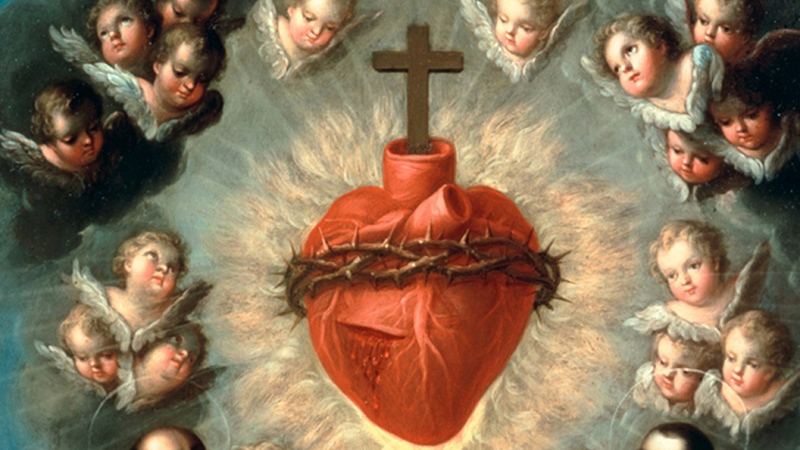 God made us for Himself; our goal is Heaven. Now, if you need to go somewhere, you need two things: you need a map and you need a vehicle. Jesus Christ brought us both. Grace is the vehicle and the map is truth. “For the law was given by Moses; grace and truth came by Jesus Christ.” (Jn. 1,17) He offers this to all men, that is why the Church He founded is called Universal or to use the Greek term “Catholic.” But not all men receive His grace and truth. It is given only to the “little ones,” the proud He sends empty away; He gives His grace to the humble. It is obvious why: the proud man is full of himself – he knows it all. The humble man, knowing his nothingness, calls out to God “Jesus, Son of David, have mercy on me – if only I can touch the hem of His garment, I will be saved.” He opens his heart to God and is touched and saved. For this reason, the gate to salvation is humility and we cry out “Jesus, humble of heart, make my heart like unto thine!”

Now, man in his rebellion against God has recently begun to subvert this month, and instead of learning to be humble, he instead makes of it a month of pride. All over the country and even outside so-called “Catholic” schools such as those in Toronto and Waterloo region, the “gay pride” flag will fly. What are we to make of all this?
First, as always, we should define terms. “Gay” does not mean “sexually attracted to someone of the same sex.” Sexual attraction to someone of the same sex is a normal albeit comparatively rare consequence of original sin. Saying someone is gay means that he claims that sin is not sin. Let me explain. Original sin affects us all generally in the same way but also in particular ways. We are all conceived in a state of separation from God, and our passions incline us to evil. We often have desires that are wrong. Read Genesis 4 and see where Cain’s ‘natural’ envy of his younger brother leads. Each of us sees it in himself. Remember the feelings of envy towards your more gifted classmate in Grade 10? Ever angry towards a phlegmatic workmate? Never had impure thoughts well up when you were tired and depressed? Natural? Yes. Disordered? Absolutely!

Now, just as we are all affected by original sin in general, it affects us in different ways in particular. Joe is particularly attracted to the sin of greed but is not vengeful; thin Lizzy is vindictive by temperament; and unless she watches herself, shy Penelope will spend all of her time thinking about what other people are thinking about her. (Advice for you, Penny: ditch Vanitybook and Instavanity.) For very many, a particular temptation is lust, and understandably so. Our body, like other animals, has instincts, particularly for the preservation of self and the preservation of the species. Animals do not have reason, they can safely follow their instincts. But man is in the image of God, he can judge. The crocodile who eats a boy does not sin; the boy who eats a crocodile is being greedy. There is no doggy court for the crime of fratricide among the hounds; the human brother-killer will pay. Man is not just an animal. He has the light of reason to judge his appetites. Acts are good if they are in conformity with right reason, and bad if they are not. When it comes to the instinct of preservation of the species, the principle applies: the procreative faculties are used well when in accordance with reason and used badly when against right reason. That is why lust is defined as a desire for unreasonable sexual pleasure. The essence of the sin of unchastity is this – to seek the pleasure associated with procreation while being completely divorced from it. Sexual pleasure is reasonable when it is connected to that for which it exists: the marriage act open to procreation.

In certain people, this appetite could be more or less divorced from reason. In a certain number, this can mean being sexually attracted to one’s own sex. It is a consequence of original sin. And so, those who have this attraction should not be worried by thinking but they are evil. It is not an evil to be tempted by unreasonable pleasure, it is an evil to consent to sin. In the case of chastity, all deviations from reason with full consent are mortal sins. If you (God forbid!) were to die in that state, you would go to hell. This is true of all mortal sins and of all of us. Not all those who commit mortal go to hell. God knows our weakness! For those who turn to Him with true repentance, there is forgiveness. “Let the wicked forsake his way, and the unjust man his thoughts, and let him return to the Lord, and he will have mercy on him, and to our God: for he is bountiful to forgive.” (Is. 55, 7)

Mortal sin is grave. It is called ‘mortal’ because it kills the soul. But there is something yet more serious. It is the denial of sin. If being an alcoholic is serious, there is one thing more serious: denial.. If, being blind, I call blindness sight, how will I even seek a cure? If, living in adultery, I call adultery good, how will I ever stop and repent? I am like Macbeth’s witches: “fair is foul and foul is fair.” This is what it means to call oneself ‘gay’ and the ‘pride’ associated with it. The ‘gay rights’ activists are deliberately attempting to force the entire world to accept evil as good and falsehood as truth. This is the attitude of he who in the beginning said “Evil, be thou my good!” Most men follow what “everyone is doing” and so many are led astray and chained once more in the darkness of error and ignorance. We do not need to weigh the guilt of the ignorant or of the malicious. We should rather try to weigh our own guilt and weep for our own sins. In the end, God will judge all and mete out more fairly than we can conceive.

What can we do?