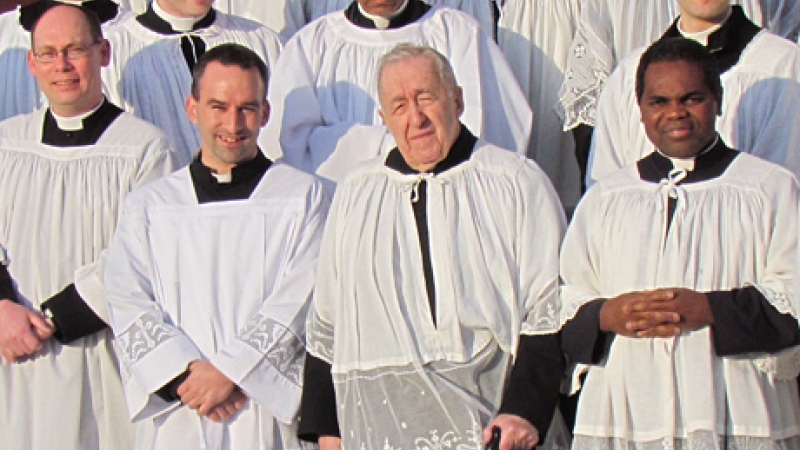 This year we commemorate the fortieth anniversary of Fr. Yves Normandin, of the famous book: “Pastor out in the Cold”. On November 9 and 16, 1975, Archbishop Lefebvre celebrated two High Masses in the parish of Sainte-Yvette, in Montreal, to encourage the parish-priest, Father Normandin, in his recent courageous return to the Traditional Latin Mass, prohibited in all Canadian parishes since the previous June 30. The consequences of these events were not long in coming: in the weeks that followed, there was a trial, Father Normandin was unfairly removed from his office and thrown out on the street (in the extreme January cold) by the Archbishop of Montreal.

But God is God, and He is all-powerful, He can draw good from evil. The diocesan priest humbly accepted this injustice and quickly became a missionary throughout Canada, literally from coast to coast - a mari usque ad mare (the motto of Canada) - for many years to meet the demands of faithful Catholics troubled and helpless with the crisis in the Church. His many small Mass centers in all provinces are the origin of almost all the present-day Traditional Latin Mass centers of the Society of St. Pius X in Canada.

What a lot of Canadians don’t know is that Fr. Normandin simply followed in the footsteps made by the Canadian Pilgrim Virgin Statue of Our Lady of Fatima, which was one of the 70 statues blessed by Pope Paul VI at Fatima in 1967, for 70 different countries around the world. This statue had travelled with two men several times from coast to coast in Canada and it was these people who welcomed Our Lady of Fatima that asked for the Traditional Latin Mass to be said in their home or another building. The late Fr. Gruner also promoted this statue of Our Lady of Fatima in many countries for many years.

We always find Providential guidance to human history and especially to the history of the Church, the mystical bride of Christ. An example of this is found with Father Normandin, whose story strongly resembles the story of Archbishop Lefebvre himself, who resigned in 1968 as Superior General of the Holy Ghost Fathers.  This resignation left him free to establish the Society of St Pius X and thus to come to the aid of souls worldwide. There is nothing new under the sun.  “This is the stone which was rejected by you the builders, which is become the head of the corner.” (Acts 4:11)

It is not easy to accept humiliations, deserved or even unjust. But what graces ensue when one does! The story of the lives of saints is full of examples that illustrate this abundantly. And indeed, it is the humiliations of Our Lord himself throughout his life which got us all the graces of salvation. “For which cause God also hath exalted him, and hath given him a name which is above all names: That in the name of Jesus every knee should bow, of those that are in heaven, on earth, and under the earth”. (Phil. II:9-10)

No humility without humiliation! This is a great mystery of the Christian life, possible only with the help of God! “It is not according to man to carry the cross, to love the Cross, willingly to suffer insults, to despise self and wish to be despised, to bear afflictions and losses ... If you trust in the Lord, strength will be given you from above and you will have power over the flesh and the world.” (Imitation II:12)

Father Normandin is one of those valiant priests who stood up after the Council to confess the faith in the Holy Sacrifice of the Mass that was facing an unprecedented crisis in the Church. They were not ashamed of the cross of our Lord Jesus Christ. Additionally they led many young people after them who have taken over, who responded to the Master's call to go to work in the harvest that is so abundant.

Our “curé” is still alive, he celebrated his 90th birthday last February and 61 years of priesthood last May! He surely can repeat with the Apostle:  “I have fought a good fight, I have finished my course, I have kept the faith. As to the rest, there is laid up for me a crown of justice, which the Lord the just judge will render to me in that day: and not only to me, but to them also that love his coming.” (Tim., IV, 7-8)

For those who do not know this story, I highly recommend reading the book which recounts it, A Pastor out in the cold (which needs to be reprinted in English).  It will also interest young people who are passionate about historical wars, because it will make them aware of this ‘World War III’ (Archbishop Lefebvre’s expression) taking place since the 1960s with Vatican II. Father Normandin is one of the first priests in the world, the first in Canada at least, to have publicly taken a stand in defense of the Mass of all time, and who has been persecuted for this noble cause.

Archbishop Lefebvre himself wrote the preface to this book. ”Stories like that of Father Normandin mean that this time of persecution (against Tradition) has already happened. A persecution more painful and distressing since it is controlled by the very people who have no other mission than to defend the Catholic Tradition. (...) (His) case calls for reflection on the attitude that priests must take, if they happen to be persecuted for the traditional faith. The case of Sainte-Yvette is probably not finished (he wrote this on March 25, 1976). This story will have a sequel. Whatever the future adventures, if Father Normandin and his priestly team persevere to the end in the struggle they have undertaken to defend the Catholic understanding of the Holy Sacrifice of the Mass and of the priesthood, it will be for the glory of God and the salvation of many souls.”